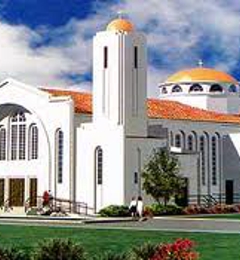 The two characteristics that have marked the Community of St. George from the very beginning have been "faith and vision".

We have much in common with the original Greek immigrants who came to this country because in a sense we, too, are immigrants in the new land of Florida. As with them, our family, social, business ties, and much of the heart, are in distant places: up North, back East, in the Midwest, or across the West Coast.

To fill the longing for family, the newcomers to Pasco and Hernando counties sought out fellow ethnics for solace. From this emerged the handful of men and women who "dreamed the impossible dream" of establishing a Greek Orthodox Church in Pasco.

Guided and inspired by Father Constantine Volaitis, they researched the telephone directories for Greek-sounding names, asked for name from non-Greek friends and associates, and finally produced a mailing list.

The events that have come to pass on the spiritual journey that began with a restaurant meeting in April 1982 to our first birthday as a church on November 14, 1983, have been a "miracle of faith and vision".

In April 1982 an initial meeting was held in the Steak and Shake restaurant followed by another meeting in May at the Oasis restaurant to explore the establishment of a church. An open interim council, to which members were added as the community grew, was appointed by Father Volaitis, and the momentum was started.

A social gathering was held in June 1982, at the Jamine Heighs Civic Club, New Port Richey, to ascertain the number of Greek families int he area, and the degree of support for a church. It was found that a nucleus of about 80 persons supported the concept.

A meeting was then arranged in June with Bishop John of Atlanta, at Holy Trinity in Clearwater, for the purpose of proposing the idea, and receiving permission for a church. Permission for a "mission" status was tentatively granted by the Bishop. A Florida State Charter was subsequently applied for and received.

In September 1982, the on-going summer groundwork for rental space began bearing fruit. Locations were narrowed, and plans for a general assembly and religious services were refined.

The first definitive General Assembly meeting was held on November 3, 1982, at First Federal Savings and Loan, Holiday. His Grace, Bishop John of Atlanta, conferred in person the official Archdiocesan approval and blessing upon the new congregation, and appointed Rev. Constantine Volaitis interim Pastor and Spiritual Advisor.

First Religious Service was held on November 14, 1982, Sunday, at Gulf Harbor Civic Center, New Port Richey, with Father Volaitis officiating. A celebration luncheon followed that was attended by 235 persons. It was also our first fundraising event.

In late December 1982, an inquiry was begun by the interim council for prospective architects. A series of interviews with local architects were held through the Spring of 1983, and the choice narrowed down to Mr. Gus Paras of Tampa.

A Vasilopeta Dinner Dance was held on January 29, 1983, at the Golden Greek restaurant in Tarpon Springs, under the sponsorship of the Maillis family who donated the location, food and liquor. The community sold 400 tickets, and raised its first "seed" money in the heady amount of $9,000.

On February 20, 1983, the community began holding its regular Sunday church services at the former Branigan's restaurant, New Port RIchey, which was offered to the congregation by the Baskovich/Williams family, at no charge, pending its sale.

March 9, 1983, a General Assembly was held for the express purpose of obtaining community approval for the purchase of 22 acres of land in Port Richey, at the purchase price of $247,000. Topographical details, financing and architectural plans were presented. Congregation approval was overwhelmingly granted.

April 23, 1983, a church-naming dinner celebration was held at the Polish-American Club in Holiday for the purpose of selecting the parish's patron saint, and 368 tickets were sold. The audience placed over 35 saints' names in nomination accompanied by monetary donations. Saint George was put over the top by 24,000 plus votes, with Mrs. Maria Tsalichis making the largest contribution. The event raised $34,600 plus for the building fund.

October 2, 1983, Mrs Maria Tsalichis, the Godmother of our church, presented the community with a full complement of beautiful altar gifts.

On October 17, 1983, the parish received a deposit of $5,000 for the remaining 2 acres from Mr. Mazis for the account of John Maniatopoulos in Europe. Closing was effected January 12, 1984, further reducing the purchase cost by another $50,000.

On October 20, 1983, the interim council voted to formalize their agreement with Gus Paras of Paras Associates Architects, Inc., of Tampa, and a contract, pre-dated 9/8/83, was accepted. The contract carried an architectural fee to the church of 6%. A series of meetings between the architectural committee and the architect followed for the purpose of design input and exchange of ideas. Mr. Paras was requested to create a design that would contain elements of Byzantine architecture, yet reflect the 20th century and blend in with the Florida environment.

A design for a church complex, beginning with a Community Center was accepted.

October also saw the structuring of the Building Fund Drive under the chairmanship of George Psetas. An objective was set to raise $350,000 for the purpose of building the Community Center as the first phase of a church complex.

A General Assembly was held on November 27, 1983, for the purpose of receiving nominations for the first elected parish council with elections held on December 18, 1983.

In January, 1984, a building fund drive was initiated with a kick-off dinner for the community on January 17 and 18, at the Spartan restaurant.

In March, Banigan's restaurant was sold, and once again the council scouted for a new location. The Lakes in Regency Civic Association clubhouse was available at a beginning rental of $100 per Sunday plus extra for Holy Week and holidays.  The first church service at the "Lakes" was held on March 30, 1984.

The Groundbreaking Ceremonies at our land site were held on Sunday, APril 29, 1984, preceded by the Divine Liturgy celebrated by His Grace, Bishop John of Atlanta. A dinner-dance followed that evening at the Regency Park Civic Center.

During August/September 1984, 7 initial bids were let to contractors by the council and the architectural committee. There were 3 responses, all excessive in cost.

On September 20, 1984, the architectural committee with several council members met with the architect to modify certain design elements. It was agreed that approximately 10 bids would be let, this time through the offices of Mr. Paras.

On November 19, 1984, the committee interviewed 3 of the prospective contractors, and submitted their findings to the parish council.

On November 29, 1984, the collective body of parish council and architectural committee met to vote and select a contractor. Tagarelli Bros. Construction, Inc. of Tarpon Springs was selected.

On December 7, 1984, the community entered into a construction contract with Tagarelli Bros. for the building of the Community Center in the amount of $452,587.

On February 5, 1985, a mortgage loan with Liberty Savings & Loan Association of Port Richey was accepted in the amount of $600,000 which consolidated the land purchase loan and the building construction loan.

The Community Center was completed in November 1985, and the first church service was held on November 24, 1985.

The "dream" had been fulfilled!